Peep into the Past - Vipranarayana 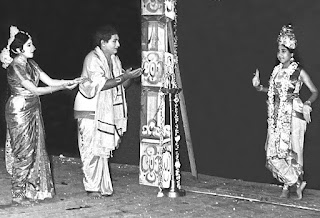 It was one of the most memorable summers I had ever spent at my great uncle Devulapalli Krishna Sastry’s house in Hyderabad. Three visionaries, Banda Kanakalingeswara Rao, credited with breathing new life into Kuchipudi, Kuchipudi maestro Chinta Krishnamurthy, and music composer Balantrapu Rajanikantha Rao, had all come together in a creative collaboration. I was fortunate to be privy to witness the unfolding of this magic, but little knew the important role it would play in my future.

Vipranarayana had its unforgettable debut in 1969. Actor Chandramohan was playing the title role at the height of his film career, and rehearsals would start at 10 pm and continue till 1 am or even later. Master garu – Vempati Chinna Satyam, was at his creative best even at that late hour, and revelling in the sheer beauty of the wonderful lyrics and mesmerising music, none of us complained! Chandramohan even learned some Kuchipudi basics from master just for this programme! The choreography turned out to be flawless, master, being a perfectionist, but the icing on the cake was having my favourite singer, the incomparable Mangalampalli Balamuralikrishna, singing for us, live on stage, for the very first time for a dance performance! What a thrilling experience, and how lucky we were! During my sister Seetha Ratnakar’s tenure as the producer for dance programmes at Chennai Doordarshan, we had the opportunity to present it again with some necessary changes. Needless to say, the passage of almost two decades had in no way mitigated the extraordinary beauty of the Yakshagana nor our happiness in doing it again. Some performances remain etched indelibly in one’s memory, and my role as Devadevi in Vipranarayana was a defining moment for me.