“There are shortcuts to happiness, and dancing is one of them,” Vicki Baum observed rightly. I happen to be one of those fortunate beings who discovered this shortcut at an early age. I had the privilege of being trained by great masters like Vempati Chinna Satyam in Kuchipudi and K.J. Sarasa in Bharatanatyam and started performing on stage in my pre-teens along with my sister Rathna (Papa) Kumar. I stopped dancing after marriage, but my job profile at Doordarshan kept me continuously connected with dance until the day I retired. I continue to engage with dance post-retirement, and whenever I encounter roadblocks due to unforeseen circumstances, I rekindle evergreen vintage vignettes to maintain the happiness quotient.

Fifty-two years ago, I played a small but significant role in the dance-drama, Vipranarayana, choreographed by my revered guru Vempati Chinna Satyam. Eighteen years later, I had an opportunity to direct it for television, and it holds many special memories for me both as a dancer and a broadcaster. Vipranarayana, the story of the Vaishnavaite saint Thondaradipodi Alwar, was initially written as a Telugu musical opera for All India Radio, Vijayawada, by my grand-uncle Devulapalli Krishna Sastri. This was at the behest of renowned theatre actor Banda Kanakalingeswara Rao and Kuchipudi exponent Chinta Krishnamurthy. They were Sangeet Natak Akademi awardees and staunch promoters of Kuchipudi who were instrumental in establishing the Siddhendra Kalakshetram in Kuchipudi in 1957. Krishna Sastri composed extraordinary lyrics in the Yakshagana style, and Balantrapu Rajanikantha Rao gave them wings with his outstanding music. My mother, Vinjamuri Anasuya Devi, decided to renew this brilliant piece of work and present it as a Kuchipudi dance drama in Hyderabad. She commissioned Kuchipudi maestro Vempati Chinna Satyam to choreograph it with my sister Rathna (Papa) Kumar as the heroine, Devadevi, and popular cine actor Chandramohan as the protagonist, Vipranarayana. Kothapalli Padma performed the role of Devadevi’s older sister, Madhuravani and Durga was their mother, Vesyamatha. I was Lord Ranganatha Swami, who sets right all the wrongs in the end, and my younger sister Kamala was Vatu, the Lord in the guise of a young boy. It was the first time we three sisters performed together on stage. Chandramohan was a committed artist despite being a highly sought-after film actor. He had to squeeze time for dance practice after his busy shooting schedule. It was a demanding task as a master was an uncompromising disciplinarian. As the rehearsals unfolded, both my master and my mother felt the need for additional lyrics for smoother transitions in the story. My grand-uncle complied, and my mother, who was a top-grade music composer for All India Radio, composed these songs in the same genre as Rajani to blend in seamlessly with his style. 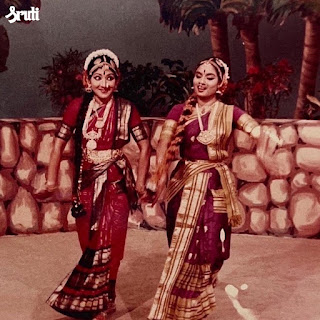 It was a red letter day in the annals of Kuchipudi dance when Vipranarayana was premiered at the Ravindra Bharathi in Hyderabad on 31 December 1969, under the auspices of the Vinodini Sabha. The auditorium was filled with connoisseurs, celebrities and dance enthusiasts who came from far and near. Expectations were high as it was the coming together of three great legends of literature, music and dance. In addition, the vocals were rendered by the incomparable Mangalampalli Balamuralikrishna and stalwarts like Mullick, Vinjamuri Lakshmi and B.K. Sumithra. It was for the very first time in his musical career that Balamuralikrishna sang live on stage for a dance programme and we were blessed to have this exemplary singer lend his voice for our dance! Master created magic with his brilliant choreography, and two of the songs from the dance drama, Koluvaithiva Rangasayee and Vedalera Vayyarulu got inducted into the Kuchipudi margam as solo items.
The recording started on a euphoric note, and I managed to complete the opening sequences and the finale in the temple background. The huge temple set had to be dismantled, and a simple hut had to be erected for the romantic interludes between Vipranarayana and Devadevi. By the time the set and lighting were completed, it was 5 pm, and my studio time was up. The recording had to be stopped abruptly due to the paucity of time. It was an awkward situation, and I was close to tears. Chandramohan had been gracious enough to attend all the rehearsals and be at the studio all day along with the other artists, participating for the sheer love of art, as there was not much monetary benefit from dance those days. Imagine my predicament with an unfinished production and everything at a standstill! We were understaffed and had to adhere to strict schedules. But this was an exceptional situation, and I begged my director to provide me with minimum staff to record the remaining sequences with a single camera. He helped me put together a small crew to complete the recording. It was a paradigm shift from the macro to the micro, but all the artists gave their concerted best to make it blend seamlessly.
Vipranarayana was a landmark success as a musical opera, a dance drama and a television show because of the confluence of great artists. From the concept to the final presentation, every artist involved gave their 100 per cent. I had a most unusual experience first-hand witnessing this. For the stage show in Hyderabad, Rathna left along with the master and the other dancers two days early for stage rehearsals. My mother and I travelled a day later along with Balamuralikrishna. We ended up missing our train as we got held up in a massive traffic jam due to some protests and diversions en route to the station. My mother moved heaven and earth to get us on a later train up to Warangal, and we had to travel from there by bus. After a trying, long journey, we finally reached Hyderabad and barely an hour later, he enthralled the audience with his mesmerising music. To this day, these vignettes are etched in my mind and I still feel a great sense of gratitude for my involvement with this amazing project. 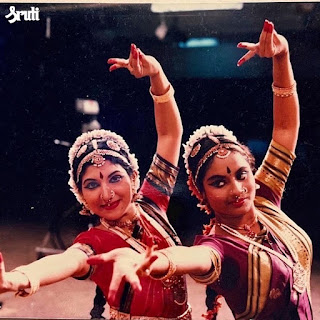 I was keen on recording Vipranarayana for Doordarshan, but it took me almost eighteen years to revive it. My mother tried to gather the same artists once again, but unfortunately, Balamuralikrishna was not available for the recording. Bhagavathula Seetharama Sarma sang with equal verve along with Vinjamuri Lakshmi and Prakasa Rao. Rathna and Chandramohan did the lead roles, but this time, Sailaja was Madhuravani. Our set designer Venugopal created a magnificent Srirangam temple set and Nandavanam nearby. I could not participate in the programme as I was directing it but the divine vigraham of Ranganathaswami effectively resolved all the issues in the end through visual special effects.