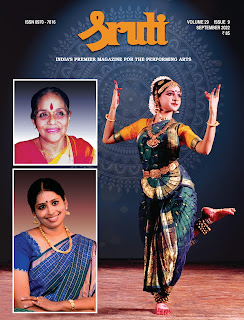 Come August - September, the performing arts scene seems to be buzzing with activity—at least in Chennai the cultural capital. The entertainment columns in newspapers and sabha announcements are packed to the hilt. Last month, music and dance programmes drew full houses in many venues; one example was the ten-day long Uthsava Bharatham organised by Natyarangam (dance wing of Narada Gana Sabha) to  celebrate its silver jubilee, which drew large  audiences every day. It augurs well for Chennai’s music and dance season just about two months away, provided the rains do not play spoilsport.

In this September issue of Sruti, we bring to you stories of three renowned women artists. We pay our homage to nonagenarian Bharatanatyam exponent and teacher M.K. Saroja who passed away on 13 June this year in Bengaluru. We chose to do it this month to coincide with the two-day memorial titled ‘Saroja Mohanam’,  being organised on 17 and 18 September in Delhi, by Attendance,  spearheaded by son Ashish Khokar and his wife Elisabeth. It celebrates the memory of M.K. Saroja alongwith her scholar husband  Prof. Mohan Khokar who passed away on 17 September 1999, whose anniversary is observed every year at the Habitat Centre in the capital. Mohan Khokar, blessed with a pan-Indian outlook, was a doyen in documenting dance history through his numerous articles and photographs. He was a good friend  of Sruti and its founder-editor N. Pattabhi Raman and wrote several interesting articles for the magazine. I first met him at the National Seminar on Bharatanatyam Traditions organised by the Sruti Foundation in December 1989. M.K. Saroja performed in one of  the seminar sessions as a  torchbearer of the bani of Kattumannarkoil Muthukumara Pillai. I had the good fortune of interacting with both of them since then. I recall that Khokar was very reserved, would smile but rarely, and was very meticulous in his writings which were a fund of information. The Sruti Foundation had the privilege of honouring M.K. Saroja with the E. Krishna Iyer Medal. She was a famous dancer of her time, but she was the embodiment of simplicity, humility, dedication and  devotion to God, her guru and her art. I also met her on more occasions when she was honoured by Natyarangam and the Association of Bharatanatyam Artistes of India (ABHAI). She was soft spoken, had a gentle smile and graceful demeanour. She was warm at heart, self effacing, without any frills and fancies. This Sruti feature has interesting articles on her by our senior critic and correspondent Leela Venkataraman, Saroja’s French disciple Vidya and son Ashish Khokar.

Carnatic musician Nithyasree Mahadevan and Bharatanatyam dancer-teacher Urmila Sathyanarayanan are stars who have been in the limelight for several decades. Hailing from a great musical family, Nithyasree has risen to fame on the merit of her music, her unique voice with an admirable range, her vast repertoire ranging from classical to devotional to films, and her fondness for Tamil compositions.

Urmila Sathyanarayanan too is a much sought after dancer and teacher, famous for her charming stage presence, sparkling nritta,  eloquentabhinaya, and graceful poses. Her interview for Sruti reveals her deep faith in the divine and the guru.

We also have insightful writeups on the Bhagavata Mela natakam festival held at Melattur held after the demise of the iconic artist S. Natarajan, and also on the tenth edition of Sarasa Natya Mala dedicated to the memory of Guru K.J. Sarasa. Happy reading!

Before concluding I must say that it was indeed heartwarming to watch the kaleidoscopic music and dance presentations highlighting the rich culture of Tamil Nadu as well as the macro-overview of Indian classical dances, during the opening and closing ceremonies of the Chess Olympiad held in Chennai with much fanfare.